There are many things in day-to-day life that are common occurrences, and then there are those times when the rare and the extraordinary happen. In Alaska, we think nothing when a raven swoops down and steals a morsel of food (i.e., garbage) from the parking lot of the local grocery store. We barely flinch when we drive by that moose grazing off the side of the highway (except to ensure we won't contribute to the dead moose count sign between Anchorage and Wasilla). We may crane our neck to watch a bald eagle soar overhead, or perhaps we may get a fun sighting of one swooping down to snatch a trout out of Taku Campbell Lake. We watch with inquisitive wariness when a black bear ponders into our neighborhood, curious and fascinated but with the same thought in our minds: "Yep, that's Alaska for you."

There's levels of common and rare sights in daily life. And then there's the one of a kind, never to be repeated events that stop us cold in our tracks. That's what happened to Yosuke and Miki Tanaka when they were recently scuba diving off the coast of Japan and encountered the stuff of legends and sea monster stories. Hearing about a possible sighting of a giant squid from a fishing equipment vendor, the couple boated out into the bay to see if they could find the animal. Once located, they donned their scuba gear and swam with the creature, taking some amazing video footage in the process (see above). Based on the video, one marine biologist estimated the animal to be young—perhaps one or two years old—measuring at around two meters long (approx. 8 feet). The squid's behavior was curious to the observers and to subsequent researchers, who noted it remained extremely docile and seemingly unperturbed during the encounter.

Giant squid have long been the subject of lore and myths. Dead specimens have washed up onto shore in various places throughout modern history, and testimony of sightings by sailors go back hundreds of years, but it's only been since 2004 that we've actually had footage of giant squid in their natural habitat. It's fair to say that our knowledge of the giant squid has increased vastly over the last twenty years. In fact, the majority of knowledge gained by marine biologists into giant squids come from studying the remains of these creatures from the stomachs of sperm whales, which are the squid's primary predator. 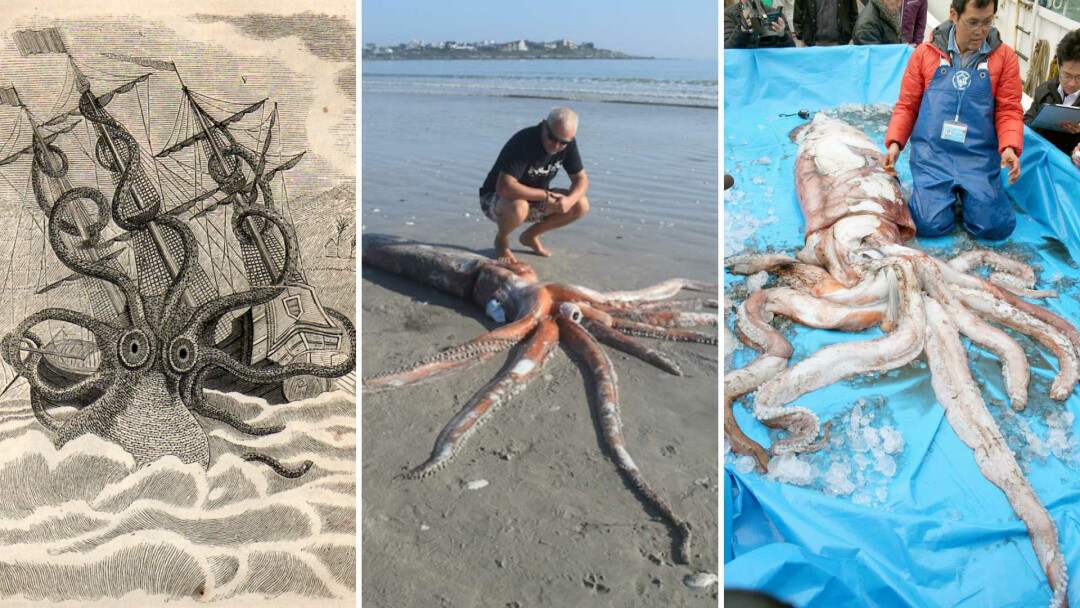 What is stunning is that this newest sighting, which appears so massive on the video footage, and this is corroborated by Yosuke and Miki Tanaka as well. Yet what's more impressive is realizing that this particular squid measures only a fraction of a fully-grown adult giant squid, which are known to measure up to 40 feet in length from the posterior fins to the tip of the two long tentacles.

If there's anything to learn from this latest encounter with one of the most mysterious creatures of the sea, it's to recognize the rarity of the event and to humbly recognize just how much we don't know about this and other creatures which are rather inaccessible to us, even with modern technology. The deep-diving submersibles that have taken humans down to the bottom of the Mariana Trench have unlocked so many new things for mankind's knowledge of the ocean's depths, and yet every piece of knowledge gained seems to introduce one hundred times as many unanswered questions.

Yet throughout this ordeal, Job never once cursed God or sinned by turning his back on God because of his suffering. That last fact is important because what Job was unaware of was a interchange that occurred in heaven between God and Satan, where Satan asked permission to bring these emotional and physical afflictions upon Job in order to entice Job to relinquish his trust and faithfulness to God. Satan was convinced that Job's loyalty was purely circumstantial. He was the quintessential fair weather friend. Take away the things that make him happy—his property, his livelihood, his children, and his health—and Job's loyalties would quickly change.

That didn't happen. In fact, the writer of the book makes it a point to emphasize that "in all this Job did not sin by charging God with wrong" (1:22). What did happen was that Job's friends spent an inordinate amount of time trying to get Job to confess his sins out of a theologically simplistic worldview that assumed all bad things that happen in a person's life result from divine punitive response to sin. Job, meanwhile, spent the entire time defending his innocence, all the while charging God with injustice under the false presumption that he was suffering because God himself was punishing him unfairly.

Both parties, it turns out, were absolutely wrong. Job was innocent; he was not suffering for some kind of unconfessed sin as his three "friends" Eliphaz, Bildad, and Zophar unfairly and ignorantly charged him. But Job was also wrong, and he made a lot of bold accusations against God that highlighted his ignorance rather than his wisdom. You see, every human in the book attempted to wrestle with Job's tragic suffering and make sense of it without ever considering if they had all the pertinent information. This is, well, a very human activity. Everyone wants to understand why suffering happens, especially when it happens to us. We want to seek out its cause and understand its origins. The the point of the book of Job, and where God ultimately silences both Job and his accusers, is that we will never have the knowledge sufficient to come to a full understanding of why innocent people suffer, not matter how "full" a picture we think we have. One commentator put it this way:

Job and his friends wanted to analyze the suffering and look for causes and solutions. Using all of their sound theology and insight into the situation, they searched for answers, but found only useless and wrong ideas, for which God eventually rebuked them (42:7). They couldn't know why Job suffered because what happened in heaven between God and Satan was unknown to them. They thought they knew all the answers, but they only intensified the dilemma by their insistent ignorance" (MacArthur Bible Commentary, 564).

I think what drew me to the book of Job, having discovered this article on Yosuke and Miki Tanaka's encounter with a giant squid, was how God highlighted creation in all its mysteries and intricacies as the primary evidence for why these men had out-punted their coverage so to speak and, in the words of Job, "uttered what I did not understand, things too wonderful for me, which I did not know" (42:3). He begins with the opening days of creation when God created and formed the world and the universe (38:4–11). He refers to astronomy (38:12–15), oceanography (38:16–18), and meteorology (38:19–30). Then he moves into various examples of zoology (38:39–39:30), all with the goal of challenging Job to recognize that the Creator has knowledge no mere creature—even one made in the image and likeness of God—an possess about how and why the world works the way it does.

Then, beginning in chapter 40, God turns to two creatures in particular which stand out as prime examples of the wisdom of God which surpasses human knowledge and understanding. First, there's "Behemoth" (40:15–23), a land-dwelling creature of enormous proportions which seems to defy identification with any extant living creature. Scholars have debated what animal behemoth really is, but there's strong arguments for understanding it to some type of sauropod species of dinosaur.

The second creature God offers is "Leviathan" (41:1–34), a sea creature that has since become the thing of myths and legends, although it is presented here and other biblical texts and a real creature (Job 3:8; Ps. 104:26). Once again, a lot of ink, both physical and electronic, as flowed arguing for various identifications of Leviathan, from naturalistic to pagan to mythical. In some texts of the OT, leviathan is used as a symbol for overwhelming power (Ps. 74:14; Isa. 27:1). No matter its context, Leviathan is always appears as a creature which is beyond man's ability to control or tame, but which is no match for God. Once again, good evidence exists to identify Leviathan as a now-extinct species of sea creature akin to a dinosaur.

Identifying Leviathan, however, isn't really the point I'm trying to make. What Leviathan and Behemoth depict are animals that are beyond man's ability to grasp or control. They point to man's finiteness, his inability, and his flagrant ignorance of God's creation. When we see another video or image or a giant squid or some other strange creature from the ocean's deepest recesses, it should act as a pause for us to ponder just how much we don't know about this world and just how much we need to trust God when things in life are happening for which we have no easy answers.

We're always going to be tempted to form a theorem or explanation for suffering. The book of Job cautions us to pause and ask ourselves what we don't know and whether we're better off resisting the temptation to draw conclusions about our suffering based on our finite human knowledge. As MacArthur writes, "The righteous sufferer does not appear to learn about any of the heavenly court debates between God and Satan that precipitated his pain. In fact, when finally confronted by the Lord of the universe, Job put his hand over his mouth and said nothing. Job's silent response in no way trivialized the intense pain and loss he had endured. It merely underscored the importance of trusting God's purposes in the midst of suffering, because suffering—like all other human experiences–is directed by perfect divine wisdom. In the end, the lesson earned was that a person may never know the specific reason for his suffering, but he must trust in the sovereign God. That is the real answer to suffering" (MacArthur Bible Commentary, 564).

If God can create and control Behemoth and Leviathan, and he can understand with perfect knowledge and detail the complex processes of the universe which are completely outside of human empirical observation, then he can certainly use suffering and every circumstance of life in ways unfathomable to us. Just because we don't know what the purpose is for our suffering doesn't mean there's no purpose to it. It just means we're human. Let man be man and let God be God.

Nathan moved to Fairbanks, AK as a teenager in 1999 where he graduated high school and went on to study music at UAF, graduating in 2005 with a B.M. in piano performance. While serving as a Jr. High ministry intern at his local church, Nathan began to sense God's call on his life to full-time pastoral ministry. He spent five years in Los Angeles, CA studying at The Master's Seminary (TMS) where he earned a Master of Divinity in pastoral ministry and a Master of Theology in Old Testament.

Nathan then moved back to Alaska and settled in Anchorage where he served for a year as a Bible teacher at Grace Christian School before joining the AGC pastoral staff in 2013. In addition to his primary role leading music and worship on Sundays, Nathan teaches a Sunday morning fellowship group and oversees the technology and media aspects of AGC's ministry. Nathan recently began teaching Hebrew grammar as an adjunct professor for The Master's Seminary Alaska distance location.

Nathan met his wife Natasha at their church in Fairbanks and were married in North Pole, AK in 2008. They have four children: Desmond, Weston, Thatcher, and Magnolia.

Back to Christ and Culture